The Saab 99 features a rather unusual engine/gearbox layout. Most front wheel drive cars have a transverse installed drivetrain, but Saab kept it fore-aft, as in the previous Saab 96. Although not with the engine in front of the gearbox, that would have required a longer nose. Instead, the engine was bolted on top of the gearbox, and tilted 45 degrees to one side in order to reduce height. To understand why, we need to take a look back in Saab’s history.

V 4 … -victory ?
In 1963, Saab engineers were looking for a four cylinder four-stroke engine to replace the three cylinder 841cc 38Hp two-stroke DKW derivate in the Saab 96. Ricardo Engineering, UK, were working on such an engine, and offered it to Saab. Saab considered this 1,2 litre engine, codenamed SCARAB, too small, and went to Ford instead. As of 1967 the 96 was powered by a 1,5 litre 65Hp vee-four from Ford-Germany. 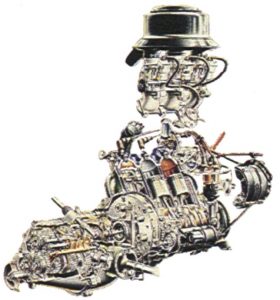 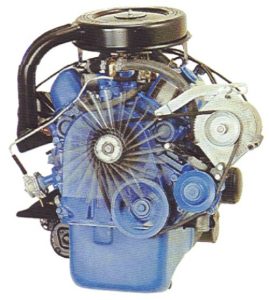 TRIUMPH, AT LAST.
But for their next project, GUDMUND (99), the pushrod Ford iron lump was unsuited. A lighter, more powerful unit was needed. The 1,2 litre Scarab engine had been shelved, but Ricardo was also developing a new family of engines for Standard-Triumph. In february 1965 Saab signed a contract with Triumph, who were to manufacture 1,5 litre (and later 1,7 litre) engines for the planned 99. Standard-Triumph’s new family of engines were supposed to range from 1,3 to 2,5 litres, and the first prototype engines delivered from Ricardo to Saab were 1,3 litres and 55 Hp. For the production models, a 1,5 litre 68 Hp version was planned, but at the 1967 introduction the unit had grown to 1,7 litres.

This Ricardo developed, Triumph built powerplant was also destined for the Triumph Dolomite. Which is quite an interesting car. Launched in 1971, it had a conventional layout, with a front engine/gearbox and rear wheel drive. But it started life already in 1965 as the Triumph 1300, and was then front wheel driven! The (Herald) engine was bolted on top of the gearbox. Does this sound familiar? Let’s take a look at it… The fore aft installed engine thrones on top of the gearbox. (Being only a 1,3 litre pushrod unit, it was so low that there was no need to tilt it) The clutch shaft drives the gearbox input shaft through an idler wheel. And finally, a differential is placed at the end of the gearbox.

FORE AFT – AFT FORE ?
Ladies and Gentlemen, we have just described the gearbox layout of the … Saab 99 aswell. A coincidense? Hardly. But Saab turned the whole powerplant 180 degrees around, and installed it backwards! For two reasons:
-First of all, if the clutch was at the back end, a detachable plate would have to be bolted to the bulkhead, in order to pull back the clutch-shaft when changing a worn-out clutch. Up front, it was easily accessed. I believe the world record in clutch-change is fifteen minutes. And that includes the bonnet-removal / refit!
-Secondly: The Triumph/Ricardo unit is tilted 45 degrees to one side, in order to reduce height. A British engineer will tilt it to the left, in order to avoid the brake-servo and the steering shaft. An engineer from a LHD-country would tilt it to the right, for the same reason. Take a look at the brake pedal/master cylinder arrangement on RHD Saab’s, and you’ll see what I mean.

1.7 LITRE m69-m72
The Triumph/Ricardo 1709 cc inline four cylinder engine was rather advanced, with a crossflow aluminium head which had a chaindriven overhead camshaft. All eight valves were positioned in line and activated directly by the cam lobes, no rocker arms were necessary. Valve clearance is adjusted by swapping shims. A timing chain driven idler shaft drives the distributor, oil pump, fuel pump, and the water pump. This quirky water pump solution, together with one row of the head’s pin-bolts that were not straight, are the weak points of the early 99’s. The alloy head was not made of the best materials, and will warp if overheated. The single row timing chain is said to be underdimentioned too.
Another quirky design was the engine mounts. The powerplant was balanced on a single engine mount, and various rubber-bushed connecting-rods were thrown into the engine bay here and there, to take up torque movoments.
Much to the constructor’s surprise it didn’t work so well, and the m70 models had more conventional engine mounts 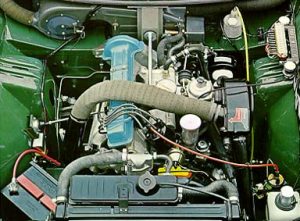 1.85 LITRE m71-m74
The Triumph 1,7 litre was later rebored to 1854 cc, but the short block allowed only siamesed cylinders, cast in pairs with no water channels between them. Both the Saab 99 and the Triumph Dolomite received this enlarged engine. Saab used a single carburettor (1,85) or electronic fuel injection. (1,85 E) Triumph used twin carburettors (1850), they even had a 16 valve head with twin carburettors. (Sprint)
Interchangeable manifolds? Definitely! Interchangeable heads? Well, the Dolomite Sprint has a double row timing chain. Best take the whole engine then.
Incidentally, the Triumph Dolomite was in production util the end of 1980, in case an “original purist” is restoring an early 99 and wants a fresh engine. Surely Triumph must have done some improvements over the years, in terms of reliability and corrosion resistance… More info at: < www.triumphdolomiteclub.co.uk>

AA AAA ADAC VIKING KÅREN
These engines were perfect examples of how important it is to actually follow the manufacturers service instructions and intervals. Especially on fluids. There used to be two types of anti-freeze, with different corrosive inhibitors. Only one of them was the right one. If neglected, the alloy head will corrode badly. And if the anti-freeze had not been changed regularly, the coolant would freeze when it got really cold. Starting a frozen engine often results in a broken waterpump-cogwheel or idlershaft. Or both. If the engine still runs, it will then overheat and blow the gasket. Now the alloy head is warped too. You roll up your sleeves and prepaire yourself for a routine head & gasket change, only to discover that the pin-bolts have seized. No problem, just grind the nuts off the pin-bolts and lift the alloy head away from the block. Oh-no, not on this one you cant! One row of the head’s pin-bolts are angled, remember?

I’ve heard of two different methods for removing a corroded head from the block.

1. Replace the sparkplugs with modified ones, that has welded-on grease-nipples. Attach the grease-gun, start the hydraulic press, and fill it with grease until the head stretches the studs so much you can insert a hack-saw blade. Sounds like fun!
2. Use a 10 Kg sledge hammer on the (alloy, -not the neglective car owner’s) head until it breaks into smaller pieces that can be hammered and chiseled away. Now this I can relate to…
3. (?) This third method is provided by Saab’s own Service Information Supplement.

V8, ANYONE?
If you think this 45 degree tilted inline four cylinder engine looks like half a 90 degree vee-eight, you’re absolutely right! There was a V8 version too. A 2997 cc / 146Hp alloy block engine propelled the Triumph Stag. Reputedly so unreliable that the car was nicknamed Triumph Snag. Here too, neglect played a large part of the actual problem. I dont know if the bolt-pattern for the gearbox equals the 1,7/1,85 engines, or if the footprint of the sump matches, but the first one to shoehorn a Stag V8 into a 99 wins a prize !

I have seen a 900 with a Rover V8, but that car had been longitudinally cut in two and widened by 20 cm. The tunnel was raised so a normal gearbox and prop-shaft would fit, meaning rear wheel drive. That doesn’t count !!!

2,0 LITRE (B) m72-m81
Saab decided to make their own version of the engine, in order to rectify it’s shortcomings, and at the same time make it even larger. They were successful, in both aspects. In 1972 they presented the B-engine, which compared to the Triumph built engines, was BULLETPROOF. It wasn’t so much a new engine, as it was an evolution of the old one.
– The block was a little longer, to accomodate water channels between all cylinders.
– They used a higher grade aluminium in the head, to eliminate the corrosion problem.
– All cylinder head bolts were screwed straight into the block.
– A double row timing chain proved utterly reliable. And noisy.
– The first B-engines had the alternator in the same inaccessible position as the 1,7/1,85 engines (under the exhaust manifold), but later it was moved to the top of the block.
– The distributor was bought in from Bosch, rather than AC Delco.

​At first it was only available in the EMS, equipped with Bosch electronic fuel injection, giving 110 Hp. As of m73 models, a 95 Hp single carburettor version was available throughout the range. Later, compression was raised and power went up to 100 Hp. It was joined by a twin carburetted 108 Hp S-engine in 1975. The same year electronic injection was dropped in favour of a mechanical fuel injection, also delivered from Bosch. Power was upped to 118 Hp. A Bosch hall-effect electronic ignition was installed on turbo engines and in the m80+81 GLi. And US-export cars. Otherwise, it was points and capacitors creating sparks.

2,0 LITRE (H) Green block m82-m83
In 1981/82, Saab presented the H-engine, an extensively revised version of the previous one.
– The H-engine is fifteen kiloes lighter than a B-engine.
– The alloy head had a different (more effective?) shaped combustion chamber, allowing lower octane petrol to be used, even with a raised compression ratio.
– The idler shaft was removed, so all the ancillaries had to be relocated:
– The oil pump was moved to the front of the crankshaft, behind the V-belt-pulley.
– The distributor was mounted directly in line with the camshaft, pointing towards the radiator.
– The fuel pump was installed at the side of the head, between the distributor and the camshaft.
– The water pump was located in the front of the engine, and driven by the V-belt, as on most other engines.

This meant that the H-engine was a little longer than the B-engine, which in turn was longer than the Triumph/Ricardo engine for which the engine-bay originally was designed. Although it went straight into the 900’s long snout, it was simply too long for the 99. Saab had to redesign the bulkhead in order to make it fit. So will you.
​- The head casting had a channel (between cyl. 2 and 3) from the exhaust manifold to the intake manifold, intended for EGR systems. This is why intake manifolds are NOT interchangeable between B’s and H’s, although they look similar on the outside.
– The timing chain was relieved from the load of the idler shaft. Driving only the camshaft, it could now be reduced to a single row chain. BIG MISTAKE. Somewhere between 120.000 Km and 150.000 Km the engine would commit suicide. The rather complicated timing chain tensioner was to blame. It hastily wore out, snapped and let the chain loose. Piston met valve. Car owner met workshop. Workshop very very expensive.

​2,0 LITRE (H) Red block m84-m86 Grey block m87-m91
This mayhem went on for two years, until the final makeover of the eight-valve H-engine was carried out for m84 models. A revised timing chain tensioner was fitted, and retrofitted on older H-engines who had not yet self-destructed. The starter motor was moved to the opposite side of the engine. Living under the exhaust manifold, next to the turbo, was afterall a tough job. They should have done this years ago. From now on, an inductive electronic ignition from Bosch was standard on all engines, not just the turbos. Hardened valve seats allowed unleaded fuel. And the oil filler cap was removed from the valve cover. Insted, the dipstick pipe got a screw cap and oil was filled directly into the sump.