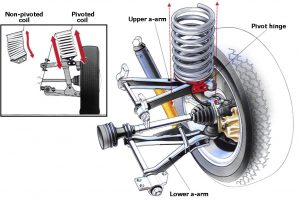 The Saab 99 inherited its front suspension layout from the Saab 96, although dimensions were different and no parts were interchangeable between them.
It is independent, with asymmetric, unequal length upper and lower a-arms (wishbones), coil springs and telescopic dampers.

From m73 models, the lower spring seats were pivoted, to prevent the coil springs from deforming under compression. 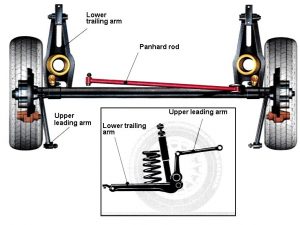 – The first one (m69-m74) had a two-piston fixed brake caliper, and a tiny drumbrake inside the disc, for handbrake.
– The second one (m75-m81) got a single piston floating caliper, that also was operated by the handbrake cable. The wheel bearings were pressed directly onto the outer driveshaft, and the hub bolted to the driveshaft
– On the third one (m82-m87), the wheel bearings were pressed onto the hub, and the (fully floating) driveshaft inserted into the splined centre hole of the hub and secured by a nut. This construction was 2 Kg lighter than the previous one. Each side! On this hub assembly, the driveshaft can be removed separately.

All front hub types use the same balljoints. The hub assemblies (together with its respective driveshaft) are interchangeable between all models.
My m78 99 now has the late type hub/driveshaft from an m86 90. A hub/driveshaft assembly from a 900 will also fit a 99. 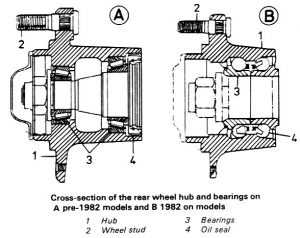